What kind of large-caliber ASVK sniper rifle is used in Ukraine?

In Ukraine, snipers use 12.7 mm ASVK (large-caliber army sniper rifle) with special incendiary cartridges. This weapon has become a universal tool and is used both to destroy manpower and armored vehicles, and to destroy shelters.

This large-caliber sniper rifle was used during the Chechen campaign and in Ukraine. ASVK was adopted by the armed forces of the Russian Federation in 2013 under the name “12.7 mm sniper complex 6C8”. It is also in service with special forces of other law enforcement agencies, including the National Guard. This sniper complex is designed to destroy openly located manpower, single, group targets. It can also be used for unarmored and lightly armored combat vehicles, as part of the tests, the rifle was able to pierce the BTR-80.

To create this rifle, the layout of the bullpup mechanisms was used, which made it possible to reduce the overall length of the weapon to 1420 mm while maintaining a significant barrel length — 1000 mm. The mass of the rifle without cartridges and optical sight is 12.5 kilograms, in the modernized version of the rifle, longitudinal grooves were made in the barrel and the butt was redesigned, which made it possible to lose 2 kg of mass. Barrel «floating» type is fixed cantilevered in the receiver and does not come into contact with other parts of the rifle, it is made by cold forging. A muzzle brake is installed on the barrel, which reduces the recoil force by 2.5 times. When shooting, bipods are used. 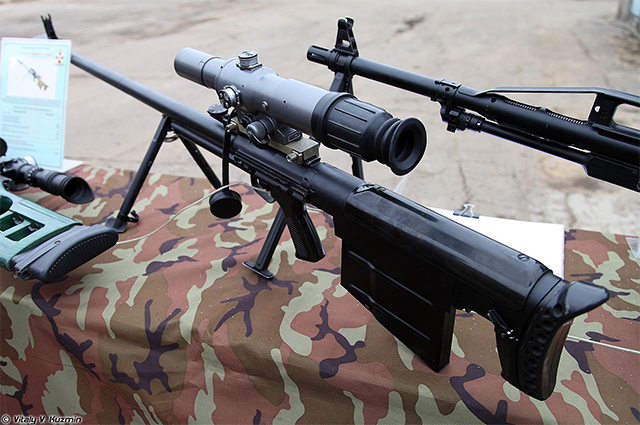 The rifle is equipped with mechanical sights. Standard day optical and night electronic optical sights are also used, which are mounted on a special rail.

Work on the creation of a large-caliber sniper rifle at the V. A. Degtyarev plant in Kovrov has begun in 1996. In 1998, a rifle was created, called SVN-98, and went into the first experimental series. On the basis of SVN-98 in 2000, the KSVK rifle was developed, which, like its predecessor, went into the experimental series. After thorough testing and trial operation in the active forces, in 2004, the same authors created an even more advanced rifle, which was called ASVK. It is this type of weapon, from 2004 to the present, that has been put into large-scale production.