Putin admitted that he often take a blood test

The President talked to young businessmen about Peter I and Russia

Vladimir Putin drew parallels between himself and Peter I, whose 350th birthday was celebrated on June 9th. According to the president, the emperor “did not take anything away” from the Swedes during the Northern War, but returned the territories that historically belonged to Russia. “And it also fell to our lot to return and strengthen,” said VVP, thus confirming that the ideological background of the special operation in Ukraine is the idea of ​​​​collecting the Russian world and recreating Novorossia. 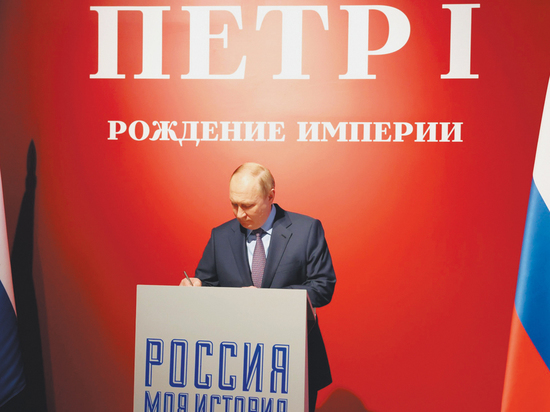 Vladimir Putin took part in the celebrations on the occasion of the anniversary of Peter I. According to Dmitry Peskov, the president especially singles out this emperor among the leaders of the Russian state. The main merits of Peter are access to the Baltic Sea and the transformation of the Russian kingdom into an empire with a powerful regular army and navy.

At a meeting with young entrepreneurs, which the Kremlin also timed to coincide with the memorable date, Putin explained why Peter is close to him. It turned out to be a readiness for a long struggle to achieve the goal. “He waged the Northern War for 21 years,” the president recalled, for the first time correctly naming the main military campaign of the Petrine era (he had previously confused the Northern War with the Seven Years War twice). VVP said that now Russia also has to fight (“Amazing! Almost nothing has changed”). And she, as in the time of Peter, does not pretend to be someone else's. “Why did he get there? He didn't reject anything. He returned and strengthened, ”Putin said, stressing that Slavs lived in the territories conquered from the Swedes from time immemorial along with the Finno-Ugric peoples. The share of modern Russia, according to him, also fell to return and strengthen. “We will certainly succeed in solving the tasks that are before us,” he added, without directly mentioning the military special operation in Ukraine.

The president expressed his attitude towards the EU countries in the same allegorical way. “If a country or a group of countries,” he said, “is not able to make independent decisions, it is already, to a certain extent, a colony. And the colony has no historical prospects.” In his opinion, there are no intermediate states in the modern world: either the country is sovereign, or a colony, no matter how these colonies are called.

Putin believes that foreign companies that have left Russia will definitely regret it . And many are already regretting, because they really didn’t want to leave. “But this is the state of countries that cannot make independent decisions,” he commented.

Unlike Europe, Russia is focused on the future, and its sovereignty, according to the GDP, consists of several components. This is military-political sovereignty, that is, the ability to make independent decisions and ensure one's own security. “Russia has always been at the forefront of events. There were times when we had to retreat, but only in order to gather strength and move forward, ”he stressed. In addition, the country needs economic, technological and social sovereignty. Putin said that all these components are interconnected and “one does not exist without the other.” “If the economy sneezes and coughs, then there will be no consolidation of society. And without this, what sovereignty? The president threw up his hands. He stressed that he considers the basic ability of society to consolidate to solve national problems in the way it is happening today.

Young entrepreneurs asked how Russia would exist in a closed economy and how fast import substitution would progress. According to VVP, Russia itself is not going to close, and no one will be able to close it by force. Those who try to do this are limiting themselves. “Inflation is already being named after me, and we have absolutely nothing to do with it,” Putin commented on the rise in prices in the US and Europe due to the restrictions imposed against the Russian Federation.

The President said that cooperation will develop not only with India and China, although trade with them, as well as with Turkey, has increased significantly since February 24. There are also Latin America and Southeast Asia. “Africa may still be sleeping! But it is gradually waking up, too,” VVP encouraged entrepreneurs. Putin promised that no difficulties with logistics or access to technology will stop ongoing projects. And import substitution is not a panacea. “No matter how hard we try to replace imports of bananas, we won’t be able to do it,” he joked.

In a conversation with entrepreneurs, Putin also said that he often takes blood, and asked about the device that can do this. do automatically. “Traditionally, they take from me, the nurses say: work with your fist,” the president opened up. He was told that the device is similar to an ATM, inside which sensors are installed that determine the location of the veins, after which the biomaterial is taken. At the same time, the machine never makes mistakes with the labeling of test tubes, while “nurses do not remember anything” and get confused. “How can they not remember? Only if they use alcohol, then they don’t remember, ”said VVP. The nurse, according to him, if she hurts, she will always say a kind word, but one cannot expect sympathy from the apparatus. Nevertheless, Putin became interested in the development and promised to tell the head of the Ministry of Health about it.