Vanessa Bryant issued a scathing rebuke of Meek Mill in a message on Instagram over his bars about Kobe Bryant.

If you’ve been on Twitter of late, you would see Meek Mill’s name trending almost every other day. The latest saga in the Philly rapper’s Twitter chapter is some lyrics regarding Kobe Bryant’s death in a helicopter crash. “And if I ever lack I’m going out with my choppa it be another Kobe,” Meek raps in the song “Don’t Worry” with Lil Baby. Fans of Kobe Bryant have been ripping Meek on Twitter since the lyric dropped, and now Vanessa Bryant has said her piece.

“Dear @meekmill, I find this line to be extremely insensitive and disrespectful. Period,” Kobe Bryant’s widow wrote. “I am not familiar with any of your music, but I believe you can do better than this.” 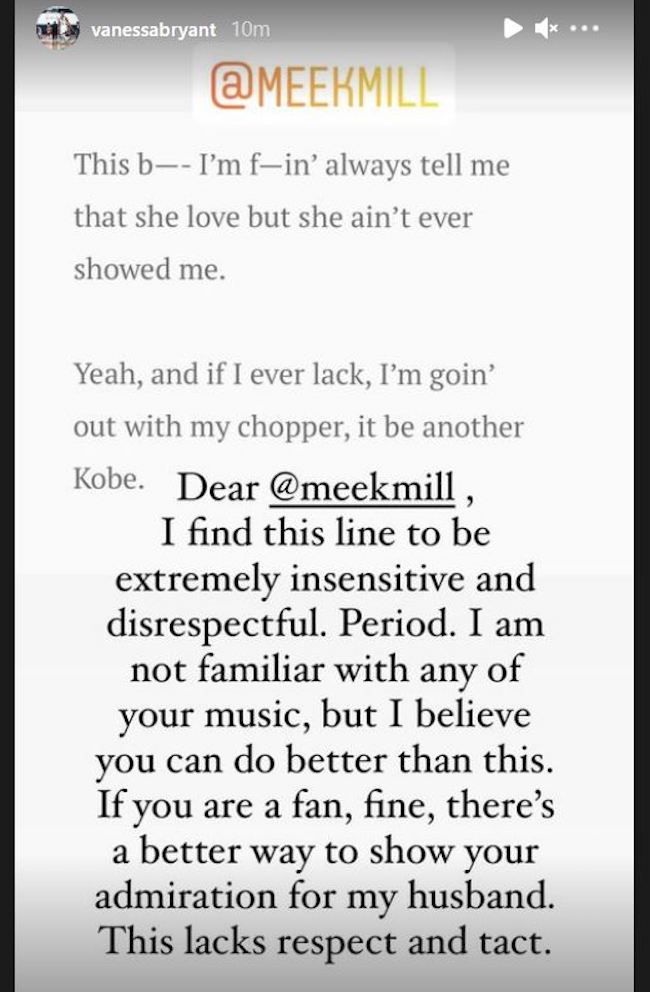 Meek Mill has since responded, telling fans on Twitter that he apologize in private to Vanessa Bryant. But before his tweet about the apology, Meek sent out another tweet that was not perfectly timed that further infuriate fans. “I’m going back savage in this sh*t f*** ya feelings,” he tweeted.

I apologized to her in private earlier today not to the public…Nothing I say on my page directed to a internet viral moment or the family of a grieving woman! If you care about someone grieving change the subject!

Rappers are known for their provocative lines, which usually attract or repel fans. Most times, fans zealously receive snippets that rappers put out to get a feel of how the song will be received. However, this time that plan backfired for Meek Mill. The Philadelphia rapper is one of the them who always connects with his fans through social media by previewing new songs. Recently, a collaboration between him and Lil Baby was uploaded to a fan page for the Atlanta star. Previously to that, he also teased a collaboration with Baby and Lil Durk. So fans are not quite sure where the sacrilegious lyric comes from.

The brief clip that had fans raining down their disdain for the rapper was posted on social media. “And if I ever lack I’m going out with my choppa it be another Kobe / Sh*t I can tell they ain’t never know me,” Meek rapped. His partner in this crime, Lil Baby, comes in with, “I damn near wanna have a son so I can name him Kobe.” That line wasn’t really ill-received by fans though, as they mainly took issues with Meek’s bars.

Twitter erupted in critique of the snippet with fans going in on Meek.

How black Twitter is doing Meek Mill after hearing that line about Kobe pic.twitter.com/lrU6w8cfOj

Meek Mill said what about Kobe.. going out with your chopper?! ????? pic.twitter.com/wul9aOEa38

The rapper is no stranger to confrontation, and just last weekend, he was in the middle of another one concerning Tekashi 6ix9ine and an online beef with Wack 100. The clip has already been deleted, and Meek used Twitter to fire back at the criticism. He posted a series of tweets saying that somebody is trying to bring him down.

“Somebody promo a narrative and y’all follow it…. y’all internet antics cannot stop me ….s*it like zombie land or something! Lol,” he posted in one of the Tweets. In another, he said, “They paying to influence y’all now … its almost like mind control ‘wake up.”

somebody promo a narrative and y’all follow it…. y’all internet antics cannot stop me ….shit like zombie land or something! Lol

They paying to influence y’all now … its almost like mind control “wake up” ?